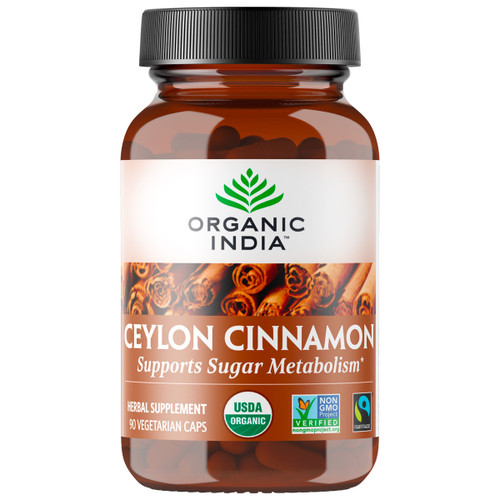 Cinnamon is a beloved cooking spice that is sourced from an evergreen tree native to Sri Lanka. To make cinnamon, the inner bark of the tree is dried and then rolled into sticks or ground into a powder. The word “Cinnamon” derives from a Greek word, kinamon, that translates to “sweet wood.”

In recent times, Cinnamon has been studied for its impact on blood sugar levels. Cinnamon can help maintain blood sugar levels already in the normal range. Its warming nature supports healthy digestion. Organic India uses Ceylon cinnamon, known as “true cinnamon,” which has a sweeter and more delicate flavor than Cassia cinnamon.

Tradition
Cinnamon has been used as a spice for thousands of years. At one point, this sweet, slightly spicy herb was worth more than gold. Cinnamon’s traditional uses include being used in anointing oils, air purification, and as an immune booster.

In the Vedic tradition, Cinnamon is a warming herb with sweet, pungent, and bitter rasas (tastes). Ayurveda uses Cinnamon as an addition to herbal churnas (mixtures of herbs that are intended to balance an individual’s constitution), where it promotes nutrient assimilation and disguises the taste of less palatable herbs. Cinnamon is thought to strengthen agni, which is described as an individual’s digestive strength and ability to assimilate life experiences meaningfully.

Do not use if you are pregnant, nursing, taking medications or have a medical condition; please consult your healthcare practitioner before use. Keep out of the reach of children.

Safety-sealed for your protection and for product freshness. Do not use if outer seal is missing or broken. Store in cool, dry place.

* % Daily Values are based on a 2,000 calorie diet.
† Daily Value not established