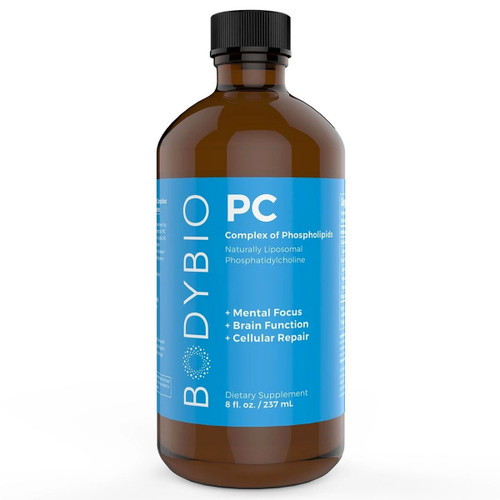 Of the tens of thousands of molecules that make up the life of a cell, Phosphatidylcholine (PC) stands apart; probably the most important one of all. BodyBio PC is made of only pure phospholipids which automatically form liposomes in the watery environment of the body, but it goes one important step further… it is also formulated with the essential lipids at a 4:1 ratio. Most PC currently available has an EFA ratio of ~12:1. BodyBio PC not only has a higher concentration of phospholipids, up to 66%, but also maintains EFA concentration at the preferred 4:1 ratio, a BodyBio exclusive.

BodyBio PC is a special, highly concentrated mixture of phospholipids with the highest one being Phosphatidylcholine. The key fact is that PC declines with age and disease.

What are the exact ingredients in BodyBio PC?

Why is Ethanol in BodyBio PC?

Ethanol is used to extract the phospholipids from the soy concentrate. The ethanol is then removed by vacuum distillation; however there is a small amount that is left ~ 2%

What is a Phospholipid?

Chemically speaking, phospholipids are the active component in lecithin. Compared to a typical fat or triglyceride (“Tri” meaning three fatty acids attached) phospholipids contain two fatty acids and in place of the third fatty acid they have a phosphorous containing head group. A phospholipid is unique because its tail likes oil and its head group likes water. When a phospholipid comes in contact with water, it spontaneously forms a “bi-layer structure”. The bi-layer functions as the “skin” or “membrane” of living cells and organelles.

Another crucial component of a phospholipid is the type of fatty acids attached to it. A phospholipid such as soy-derived polyenylphosphatidylcholine is rich in linoleic and linolenic acids, polyunsaturated fatty acids that provide “fluidity” to the cell membrane. Maintaining membrane fluidity is vital, as the membrane is crucial to the majority of cellular activities. BodyBio PC is formulated with those important essential oils, the omega 6 and the omega 3’s at a 4:1 ratio. 4 parts of omega 6 from soybean oil and 1 part of omega 3 from flax oil.

What is BodyBio PC most commonly used for?

BodyBio PC rebuilds the membrane and increases fluidity, which is synonymous with saying that PC is life itself.

What is BodyBio PC most commonly used for?

BodyBio PC rebuilds the membrane and increases fluidity, which is synonymous with saying that PC is life itself.

If I am allergic to Soy can I take BodyBio PC?

Soybeans are known as an allergenic food. Its allergens are found in the protein fraction and is removed in the Lecithin manufacturing process. Lecithin does contain trace levels of soy proteins and these have been found to include soy allergens. However, many allergists believe that Lecithin does not contain sufficient soy protein residues to provoke allergic reactions in the majority of soy-allergic consumers.

BodyBio PC requires additional processing of the Lecithin material to arrive at a high concentration of phospholipids, providing a quality PC.

Is BodyBio PC Safe & are there any potential side effects?

There are no known side effects with BodyBio PC.

What if I am taking other medications?

There are no known conflicts with any medication.

Take 1-2 teaspoons per day, or as directed by your healthcare provider.

If you are pregnant or nursing, please consult your healthcare professional before using this product. Keep container tightly closed in a cool, dry and dark place. Keep out of the reach of children. Tamper resistant package, do not use if outer seal is missing.

* % Daily Values are based on a 2,000 calorie diet.
† Daily Value not established