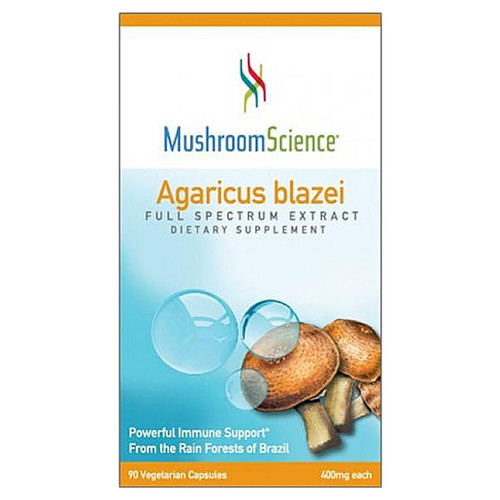 Agaricus blazei is the newest medicinal mushroom. Also called the Royal Sun Agaricus, this medicinal mushroom was first discovered in Brazil, where the native cultures prepared it as a tea for medicinal purposes but also ate it as a food. They have so much respect for this mushroom that they call it "The Mushroom of the Gods".

The Agaricus blazei mushroom contains special types of polysaccharides known as beta glucans. Studies show that beta glucan stimulates the activity of natural killer cells which are a vital part of the immune system. These polysaccharides are believed to be among the most potent polysaccharides for immune health yet discovered, given their ability to modulate the immune response and promote cellular health.*

In addition to the beta 1-3 glucan found in most medicinal mushrooms, the Agaricus blazei mushroom also contains a unique beta 1-6 glucan; this may explain the profound immune supporting health benefits documented in the published research.*

As with the other medicinal mushrooms, an Agaricus blazei extract must be prepared as a hot water extract to be effective for immune support.*

Although Agaricus blazei is now cultivated the world over, it is primarily in Japan and the United States. Between Agaricus blazei or Agaricus brasiliansis, there has been some dispute over what the proper scientific name of this medicinal mushroom should be. However, I think we can all be certain that the mushroom itself probably does not care what people choose to call it.

We use careful chemical analysis to ensure that our Agaricus blazei extracts contain the same beta glucans and polysaccharides studied in the published research.

Mushroom Science is the only medicinal mushroom company in North America that lists the levels of active compounds on every label. This guarantees you have the information you need for effective use of the product.

Warnings: Keep out of reach of children. Do not use if allergic to mushrooms, pregnant or breast feeding. Do not use if safety seal around top of bottle is missing or broken. Store at room temperature, with lid closed.